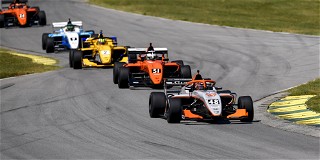 INDIANAPOLIS (January 20, 2021)- After taking commercial ownership of both Honda-powered Formula 4 United States and Formula Americas Championships at the beginning of the year, Parella Motorsports Holdings will now introduce a new scholarship program with the goal to create a more diverse field of formula drivers at the grassroots level.

To support diversity and inclusion in the junior single-seater category, PMH has partnered with Sunoco Race Fuels and Ligier Automotive North America to award one talented, up-and-coming minority or female driver in each championship with the PMH Powering Diversity Scholarship, starting in 2021.

The PMH Powering Diversity Scholarship will include entry fees to all series test days and seven championship events from PMH, a season-long fuel stipend from Sunoco and a parts voucher from Ligier.

The scholarship program will also align drivers with a team of executives and mentors, like Willy T. Ribbs- the first African American driver to compete in the Indianapolis 500 and test a Formula One car- to help advance their goals of reaching the upper echelons of racing.

“After having several conversations last year with Willy (Ribbs) regarding minorities in motorsport, I knew we had to create a more inclusive environment in which opportunities for young drivers can be realized,” said PMH CEO and President Tony Parella. “With the extended sponsorship from our partners Sunoco and Ligier, we were able to offer two driver scholarships (one for each series) this season.”

“The ‘PMH Powering Diversity Scholarship’ will assist in the development of the top young women and drivers of color in North America,” Parella continued. “As the program progresses over the years, we ultimately want to create a more diverse and inclusive community in junior motorsport.”

Nominated by team owners and other industry leaders, candidates for the 2021 season are already under consideration and the inaugural PMH Powering Diversity Scholarship finalists will be announced in the upcoming weeks.

F4 U.S. and FR Americas will kick off their seasons with a series of off-season tests starting this month. For a full event schedule, visit F4USChampionship.com or FRAmericas.com.