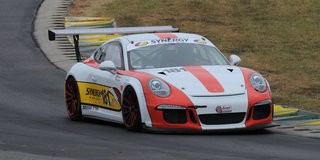 As one of the founders of Synergy Racing, Danny Marshall, of Danville, Virginia, has raced in the Rolex series for years, competing 12 times in the Rolex 24 at Daytona. But in his daily life, Marshall is a Representative in the Virginia House of Delegates.

“When we were racing professionally, I would sit on the house floor with my laptop while all the guys were at Daytona, and I was checking lap times,” he joked. “But I was elected to serve so I was not going to leave early. I’d get on a plane and fly from Richmond to Daytona and get in the car.”

Synergy’s garages are located on-site at VIR, and Marshall has a special connection to the track. “I came to the first race here in 1957 with my father, when Carroll Shelby won,” he recalls. “And I came to the first IMSA race here when Hurley Haywood and Peter Gregg won.”

Marshall’s pro racing resumé is extensive, but until this year, he had never taken part in SCCA Road Racing.

“When I saw that the Runoffs would be here, I figured it was a bucket list thing to do,” he says. “I went through the whole process to get qualified and it was really easy. It’s been an enjoyable experience.”

Each year, SportsCar Magazine takes a shot at guessing who will triumph at the Runoffs. This year’s predictions are out and can be reviewed through the links below:

Before you Win, You Must Qualify

Qualifying Continues Thursday
The third and final day of SCCA National Championship Runoffs qualifying begins at 8 a.m. Eastern Time on Thursday. Audio-only coverage will be available at SCCA.com/live with commentary supplied by Runoffs pit reporter Heyward Wagner, as well as Gregg Ginsberg (Super Tour Radio), Andy Hollis and Larry MacLeod. Audio commentary of the three race days will be supplied by the Super Tour Radio presented by Hoosier Racing Tire broadcast team consisting of Mike Wolfe, Bob Steele, Andy Delay, Brian Donati and Ginsberg. Live, online video coverage of Runoffs races, presented by Mazda, will occur Friday, Oct. 11 through Sunday, Oct. 13 at SCCA.com/live with Greg Creamer again anchoring the broadcast joined by Ryan Myrehn (SportsCar365 writer), Tom O’Gorman (pro driver), Hollis and MacLeod while Wagner provides coverage from pit lane. Be sure to tune in so as not to miss any of the action!

Photo: Danny Marshall, of Danville, Virginia, on track at his first Runoffs